In a moment of inspiration a few weeks ago I decided to enter the Last Minute Tri organised by One Step Beyond, sponsored by Esendex and most importantly taking place in my village. My view was that it would give me something to focus on after the big swim and stop me spending all of September on the sofa.

After such a disappointing Windermere swim however, I very nearly pulled out. It wasn’t just the effort of the swim, it was because it had been so tough I felt physically broken and mentally angry – not the best starting point for a triathlon. But a couple of weeks had passed and I thought it was worth giving it a go. 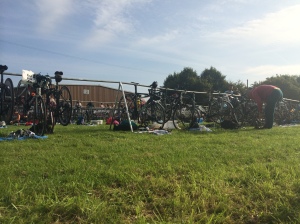 The one thing I didn’t want to do – especially after Windermere – was set myself a target. I was just going to have fun and see how I got on. And that’s what I did.

The organisation was great and my wave started exactly on the 10:34am start time. We were started in the pool in groups of five, based on our predicted swim times. The slowest went first and it gradually built up to the quicker ones that set off at 11:30am. What that meant though was that slower swimmers were already in the lane finishing their swim. Unfortunately for me, they were very slow. However, a few lengths of breaststroke and a sprint to overtake them and I had a nice relaxing swim with a lane almost to myself.

I had predicted 7mins 30secs for the swim and a quick glance at my watch as I got out of the pool suggested that was pretty accurate, but then we had to run round the building and into the transition area before the official swim time was registered. I did this quite gingerly – I hate doing this without my glasses.

The bike was next and it was an out and back course with a quite a hilly section to start with. It was by no means easy, but I survived. And even though my swim time meant that I started with the ‘good’ (but not super elite) triathletes, what pleased me was that only eight people passed me on the bike.

Now it was time to see if my legs could cope with the run. Again the run has a hill early on, so I decided not to go crazy and walked up this, but the rest of the run was steady if not spectacular and I plodded round nicely. The run course is two laps and the second lap followed the same pattern, apart from the ‘sprint’ finish.

I crossed the line in 1hour 19mins and 10secs. And although I said I didn’t have a target, I was secretly aiming for 1hour 25mins, so I was pleased with that. Right where do I sign up for another? 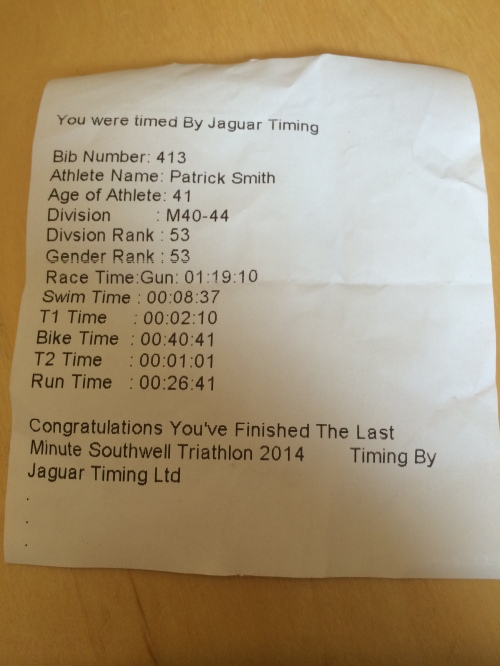 Tagged as Esendex, Last Minte Tri, One Step Beyond, triathlon