After swimming Bala last weekend I had a very good judge of swimmers (and a long distance swimmer herself) tell me that she thought I would be more than capable of swimming Windermere this year.

It hadn’t even crossed my mind before she said to be honest, my plan was always to swim it next year. Mainly because I had assumed that there was no way I’d be ready this year. But now… well it’s got me thinking.

I’ve got a 5 1/4 mile swim in Coniston this weekend, so I need to see how that goes first. It might be that last week’s exertions have taken too much out of me and I struggle this weekend. But if not, well maybe there’s a chance.

I’d love to hear your comments / thoughts on this. Should I go for it?

It turns out that Jon, my canoeist for the Bala swim, is not only an excellent canoeist, but also a pretty good photographer.

I could see him taking the odd photo as I was swimming along and it took all of my will power to not gurn for the camera and give a cheesy smile. Looking at the results, I’m really pleased that I managed that as some of the photos are amazing.

Here’s one of the people entering the water at the start (I’m at the back right).

While here are some actions shots: 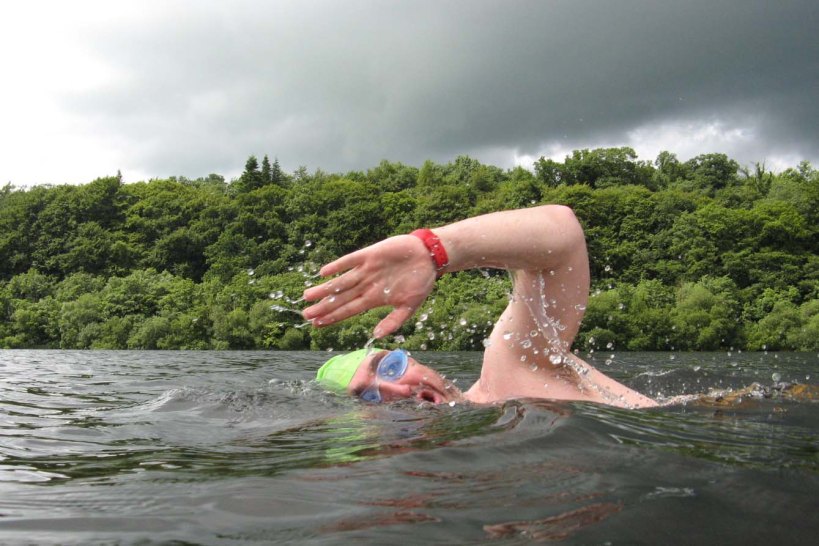 And finally, me finishing: 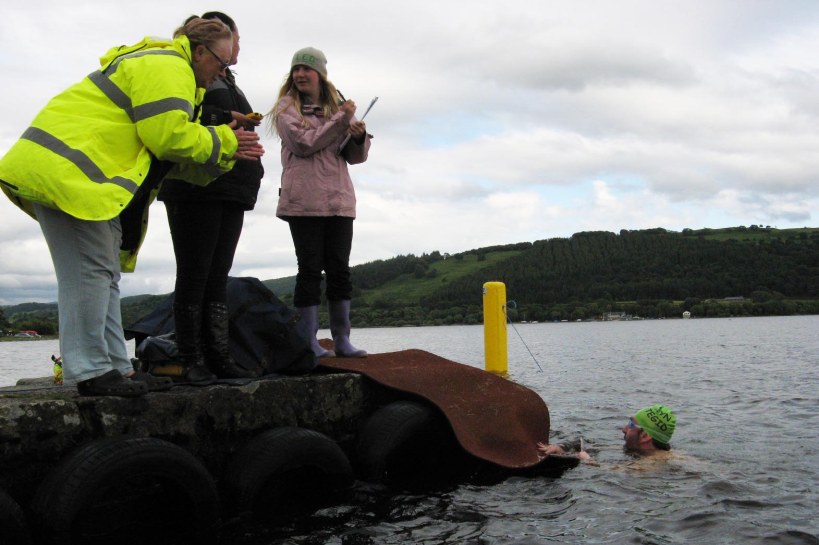 As you can also see, the scenery around Lake Bala is stunning. I obviously don’t get chance to see much more than water though.

Yesterday I swam the two-way Bala swim, organised by the BLDSA.

It sounds a lot easier when it’s written down like that. In reality it was a six mile swim that took me 4 hrs and 31 minutes and towards the end in particular was agony. My shoulders were burning with every stroke in the last mile or so, but – and this is the good bit – I did it.

I stayed overnight on Friday near Bala, so I had a relaxed morning after a wonderful breakfast at the B&B and I just had time to have a snack before the briefing meeting at midday. Then it was time to get changed, put on some grease and get ready to go in the water ahead of the 1pm start.

The water was cold – 14 degrees – but once we got swimming I didn’t feel it. In fact apart from a couple of sections the cold wasn’t an issue at all.

It all started well and I got into my rhythm quickly and was really enjoying it. We got to the first landmark, the white house (no, not the White House), which is at about 1.25 miles, in about 45 minutes. And then it was time for a quick snack and drink.

At this point I have to praise my wonderful canoeist. I’d never met him before yesterday, I found him through the incredible kindness of strangers who had responded to a Twitter plea and had introduced me to people who could introduce me to people who could help. Anyway Jon agreed to canoe for me and he provided the perfect mix of calm, support, reassurance, guidance (literally and figuratively) and even technical advice. And towards the end he also cleverly appealed to my competitive spirit, but more about that soon.

After the first stop we hit the cold patch, but once through that it felt good and steady and actually felt like I was making good time. Unfortunately what happened then was I became too much of a tourist. I stopped swimming hard and started to look around and enjoy the scenery a bit too much. That meant that instead of making good time I didn’t reach the turn until 2 hours and 22 minutes.

I was disappointed in the halfway time so I put my head down and just swam for the next mile or so. But then things started to get hard. The furthest I’d done in training was 4 1/2 miles, so as I was reaching that distance I could really feel it. For a while I was really concerned that I wouldn’t make it, it just seemed to be going on forever … and ever. But then I saw the white house again – it was tucked around a headland and was an incredibly welcome sight.

It was at this point that Jon started appealing to my competitive nature, telling me that the breast stroke swimmer was gaining on me. This was the tough bit. I was desperate to finish, desperate to beat the breast stroker and I also wanted to beat 4 1/2 hours, so I dug in. For a while I was grunting like a female tennis player with every stroke, fortunately though my head was submerged so it didn’t sound like Centre Court.

Well, I achieved two of those goals.

I didn’t quite beat the time I was aiming for. But then, as predicted I took, almost to the second, the same time as I took to finish my first marathon. In my second marathon I knocked about 20 minutes off my time, so that’s the goal for next year. In the meantime it’s more training for Windermere, starting with a 5 1/4 mile swim next weekend in Coniston Water. 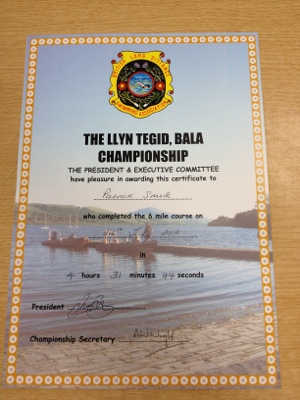 This weekend sees the first real challenge of my swimming training – I’m doing the two-way Lake Bala event, organised by the BLDSA.

Looks pretty there doesn’t it? I’m not so sure it’ll feel like that as I’m swimming it. The lake is 3 miles long, so the two-way event is 6 miles.

To put this into perspective, the longest swim I have done so far in training is 4 1/2 miles. That took me just under 3 1/4 hours, so I’m expecting this to take me close to 4 1/2 hours. Again, for a bit of perspective, a few years ago I ran a couple of marathons – I did London in 4hrs 31mins and then Dublin in 4hrs 10mins. If I complete this swim in less then my Dublin time I’d be delighted, but either way I’m effectively swimming a “marathon”.

And this is only part of the training so that I can swim the 10 1/2 mile Windermere.

To top it all there’s a lake monster called Teggie.