Yesterday I swam the 7 mile length of Ullswater with the BLDSA.

It was chilly, windy and all in all a bloody tough swim. It split into three very distinct sections for me.

Part 1 – horrible, cold and really not much fun. I knew I wouldn’t finish and would be getting out “soon” (it was never now, but always “soon”). I took my first feed after an hour and then every 45 minutes from then and the second feed seemed to be an age away. I really didn’t enjoy this section of the swim.

Part 2 – it started soon after he second feed and was probably timed with the sun coming out a bit, but I suddenly felt ‘in the zone’ and really enjoyed it. From being desperate for my second feed to happen I pushed the third one back five minutes as I did t want to break my rhythm. For about two hours I actually enjoyed myself and was swimming well.

Part 3 – was when the shoulders began to ache and the cold got into me a little bit. At this point the end couldn’t come soon enough.

But the end arrived. I touched the buoy and turned round to thank my kayaker. Then burst out laughing.

A wave had caught her against a jetty (that she had positioned herself against so I wouldn’t swim into it) and flipped the kayak over. So she joined me for a swim for the last 50m. I rescued the paddle, hence this photo.

Today was Derwentwater and a little easier. The water was fractionally warmer (14.3 degrees), the weather was calmer and nicer and it was shorter (5.25 miles). But the main thing that made it easier for me was that I was kayaking and not swimming.

That said I was kayaking for an amazing swimmer and a very fast one. She covered the 5.25 mile course in a little over 2 1/4 hours and swam brilliantly throughout.

As a kayaker it was my job to be there as safety support if needed (I wasn’t), but also guide the route and feed when needed. The speed she swam at meant that I was kept pretty busy with both of those.

She was the first swimmer home, so I’m going to take some credit for that (I’m not really, but it was amazing to watch a proper swimmer). 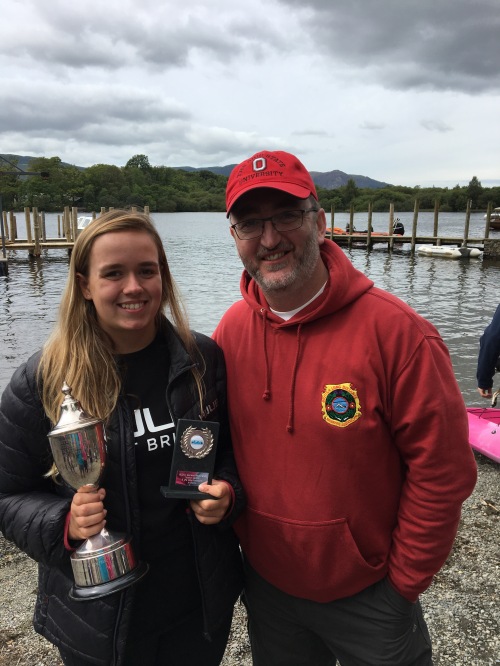 A good weekend so far.

Update – I also swam 6km in Coniston on Monday – you know, just for fun!