If you follow me on any form of social media you’ll know that on Wednesday I swam with a relay team across the English Channel. I sent some updates as we were going, but here’s a slightly fuller report.

I arrived in Dover early on Sunday morning to swim with the famous Dover training crew and to meet (although very briefly) the indomitable Freeda. I just had 90 minutes on the Sunday, but to be honest it was terrible. I felt a bit sick and could hardly swim – which was a little worrying. I put it down to being tired (a hard week at work, a very early start to drive down etc), and tried to put it to the back of my mind, but it was a concern…

On the beach I also met other members of the team and we were expecting a Thursday start.

I spent Monday just relaxing and resting, trying to beat the tiredness.

On Tuesday morning I went back to the beach for a swim with a couple of other relay teams I’d met on Facebook. It was great to chat to others in the same situation and to share experiences and motivation (and the great news is both of those teams had successful crossings). It was then that I was told that we were now likely to start late on Tuesday night. My plans for a walk up to the Castle were put on hold and it was more resting on Tuesday.

I even tried to get a couple of hours sleep in the evening – but that wasn’t very successful. So at 10:30pm I got up, showered, packed the last bits in my bags and left the BnB to get a lift to meet the rest of the team. From there it was a taxi to Folkestone Harbour and onto our boat with our amazing pilot Freddie.

My understanding of relay swimming was that you wanted your strongest swimmers to start for you to get you on the way and as that clearly wasn’t me I had assumed that I’d be third or fourth off. It turns out that the team had other plans and so at about midnight I was informed that I’d be the first to go. An honour and how could I turn it down? Although the slight fact that I’d never swum at night before and I didn’t want to mess it up for the team made me a bit nervous.

Our boat made its way round from Folkestone to Samphire Hoe beach and we got the “five minutes” call. No backing out now, so I stripped off, got greased up, attached the lights to my goggles and trunks (so I could be seen in the water) and got ready to get it.

I had to swim from the boat back to shore and climb out to be completely clear of the water to start the swim – which itself was a bit of feat on a pebbly beach. And then we were off, I stumbled and slipped back into the water (with the grace of an arthritic hippo) and started swimming – heading towards the spotlight on our boat. Although I headed directly for the spotlight and very nearly swam right into the back of the rowing boat we were towing behind us! A lot of shouting from the rest of the team on board helped me to avoid a collision and I settled into the swim.

For the first 15-20 minutes it felt as if I wasn’t moving at all. With no frame of reference on the water or the sky it just felt as if the boat was stationary next to me, but it appears I was moving and all too soon I was being told I only had 10 minutes left of my swim. I could see the next swimmer getting ready and then the ladder was lowered over the side of the boat the next swimmer was in and I was being called back to the boat as quickly as possible.

The boat slows or stops while the swimmers are changing over and so they want you in as quickly as possible so that they can then set off to follow the new swimmer. I hadn’t realised this and was hoping to have a moment to look around (and if I’m honest have a wee in the water – I’d been too busy swimming to go earlier, but by now I was desperate). But it was back in, get dry and dressed and then support the rest of the team.

– Sylvia – also a first-timer, she got quite sea-sick and so did an amazing job to get in and swim her leg each time – and swim them really well.
– Paul – he’s done a couple of solo crossings and has swum Windermere over 50 times, so he has a bit of experience at this.
– Mike – however, Paul’s experience is nothing compared to Mike’s. With 33 channel crossings to his name (not including relays) he is the ‘King of the Channel‘
– Joan – the organiser, the person who did all the work to get us all together and booked the boat etc. She did an amazing job and then once we got going made the decision that she couldn’t swim as she was worried she wouldn’t be able to climb in and out of the boat (she has bad knees). So all the organising and she didn’t even swim – thanks Joan.

So all of a sudden my next swim was only three hours away and not four. But I was dry and rested, the sun had come up and it was a lovely day – let me get back into that water!

We completed another swim each and were making great progress, France was getting closer and although there was a bit of wind and chop the weather was beautiful and we were swimming the English bloody Channel! Such was the progress we were making that if we were lucky we might even make it under 12 hours. So I got in for my third swim and swam strong and hard and again I loved it.

Then the tides started to change and the wind picked up a bit more. Paul took us past the 3 mile buoy (ie 3 miles from the French coast), but we moving more laterally than we were towards the coast. It was now almost certain that I would have to swim again, but I might even be the one that gets to swim to shore – imagine that, being able to start the swim and then finish it for the team. 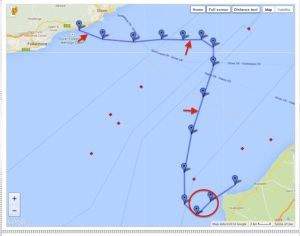 Our route – with the effect of the tides. My swims are marked and you can see I hardly moved forwards (just sideways) on my last swim.

I was told to get in and swim as hard as I could and we could hopefully get into the more sheltered area before the tides caught us – so that’s what I did. I have never swum so hard for an hour as I did then. I’m not sure I’ve ever swum as hard full stop. I couldn’t see anything in front so I just kept the boat to my left and went for it. And then I could see Sylvia getting ready and putting her costume back on (she hadn’t expected to swim) – bugger I wasn’t going to make it. Oh well, let’s get us as close as possible, so I knuckled down and got on with it. By the end of the hour I was desperate to see the ladder – please let this stop!

I got back on the boat and looked around – we had hardly bloody moved! France was still as far away (if not further)! I felt awful – I was exhausted, broken but I hadn’t managed to move us forward at all. I really felt like I’d let the team down.

But that’s the nature of channel swimming and the power of the tides. Sylvia experienced almost the same thing and the strength of the tide meant that we moved even more laterally during her swim. But what Sylvia had done was get us into a position where the tides and wind dropped a little and so Paul was able to swim to the beach. And we had done it in 14 hours and 43 minutes.

Paul on the last leg

We had swum the English bloody Channel.

Paul was rowed back to the boat and we had just had the 2 1/2 hour journey back to Dover. I nodded off a couple of times during that, but once we were back it was handshakes all round and I walked back to the BnB. A bit of time collapsed on the bed, a shower, liberal applying of after sun (and not shower gel) and I went out for a celebratory pint – which I couldn’t even finish, so back to bed and dreaming of being at sea!