It wasn’t far each time, but it felt genuinely good to be out there running. I’m almost starting to like it now.

The first run was on Sunday afternoon. We had arrived on the Saturday, so the Sunday was pretty much a free day. We pottered around for a bit, then mooched and then did a bit of relaxing. But after that heavy workload my colleague Kate and I actually went for a run. We were staying not far from Montjuic palace and the old Olympic park, so we set off there. We did just over 5.5kms at a very slow pace. And it was lovely.

So on Tuesday morning, as I didn’t have to be in the Congress until a bit later I set off again. I didn’t go quite a far this time, but I did go a bit quicker. And again it was lovely.

What I really love about this is that I actually wanted to go and thoroughly enjoyed it when I did. I’m almost starting to like this running lark.

Of course, I was also planning to go out again at the end of the week, but the show broke me on Thursday and I couldn’t face it and then Thursday night’s beer broke me for Friday. So there’s still a long way to go. 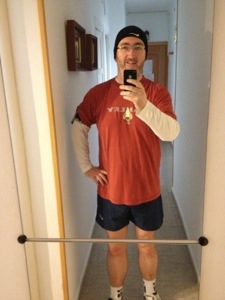 2 responses to “Running in Barcelona”