… so good they named it twice.

I was lucky enough to go to New York last week with work (BoothChat was supporting an event out there) and I have to admit that I surprised myself by having a great time.

The work bit went very well, which of course is a bonus, but the real surprise was that the city bit was just as good.

I’m not really a big city person and although I lived in London for eight years I can’t say that I was disappointed to leave. So when I knew that we had an extra day in New York I won’t say I was dreading it, but I wasn’t expecting it to be as great as it was. But it was great!

The first thing we did was walk along the High Line – we were only staying a few blocks away at Yotel (an uber cool hotel – check it out here). If you’ve not heard of it the High Line is a new park in New York that has been established on an old goods train line. It’s about three storeys off the ground and the train line was originally used to move goods around without clogging up the roads. However it’s been abandoned for a few decades and about ten years ago the work to reclaim it and turn it into a park started. 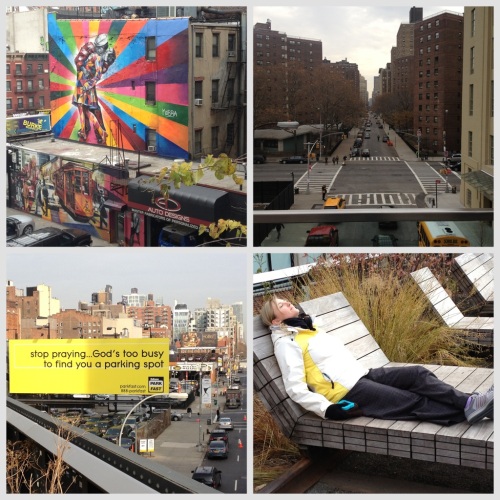 A selection of images from the High Line

Firstly, it’s amazing that it exists, that an idea like this was had and a project like this came to fruition. But also it gives you a great perspective on the city and allows you to see things that you wouldn’t or couldn’t normally.

Once we had walked to the end it was time for a hotdog from a street vendor. It had to be done!

Then we jumped on a subway and headed to the financial district. We didn’t spend a lot of time there, but we did wander among the skyscrapers. We were actually headed for the Statten Island ferry. The ferry’s free and takes commuters and tourists on the c. 25 minute trip between Manhattan and Statten Island. For tourists the main reason to go is that it goes right past the Statue of Liberty and then provides an amazing view of downtown Manhattan. So we got on, got off at the other end and came straight back again – a great way to see the statue and also to people watch. 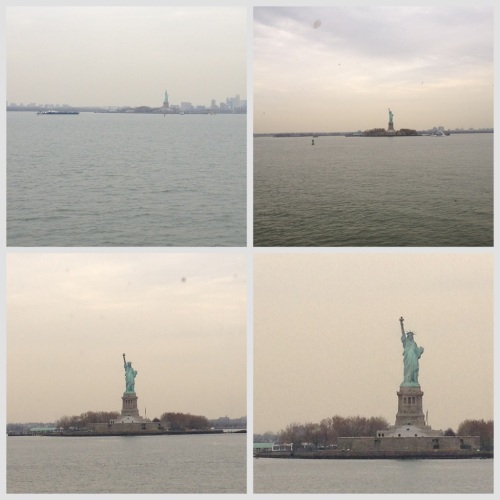 That was the day, and it doesn’t sound like much written down, but I loved it. And I also loved New York and am now very keen to return.

I can see why they named it twice!