Well, it looks like my recent Canadian holiday has added about 2kgs to my already full* frame. It’s not altogether surprising though as I quite like to eat (hence the already “full” frame) and Canadians like to give people food.

* I’m being polite and not actually calling myself fat.

I was in Canada for about 10 days. From a diet perspective the first three days in Vancouver were pretty good. The food was good and plentiful, but not overly so and I also got to go out for a run a couple of times.

It was once we got to see my relatives in Alberta that things started to go downhill for the diet. It’s ten years since I last visited them and they were pleased to see me – and to show that pleasure they offered food… and then more food. Don’t get me wrong, the food was great – from ribs and steak and burgers and cabbage rolls to donuts and apple pie and cinnamon buns – it’s just that there was a lot of it. On top of that, 25cms of snow put paid to any running. 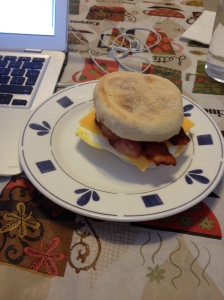 This was just a mid-morning snack. I’d popped round to my cousin’s to use her wi-fi and she was cooking these just on the off-chance that her son would come round. I mentioned how good they smelt and one appeared in front of me. I’d only just had breakfast, but… well it would have been rude not to.

This was lunch just before we left – absolutely gorgeous steak, with jacket potatoes and veg. It was beautiful – but I nearly couldn’t drive to the airport because I was so full.

I know I could have refused all the food, but actually I couldn’t have done. And I didn’t.

If you want to see more examples of Canadian food, then see these pictures by @walkerama.

Also, if you didn’t get the reference you should definitely watch the film Canadian Bacon.